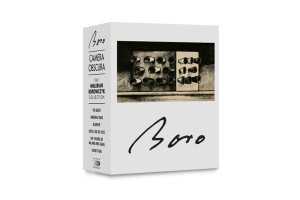 This groundbreaking collection brings together Walerian Borowczyk’s key films from a twenty-five-year period stretching from 1959 through to 1984.

Not only are many of these films available on Blu-ray and DVD for the first time, but also in new digital high definition restorations approved by the director’s widow, Ligia Branice.

In addition to exclusive documentaries featuring cast and crew, an hour long portrait of Borowczyk is to be included, featuring the director’s musings on painting, animation and sex.

Accompanying this seminal release is a book edited by Borowczyk experts Daniel Bird and Michael Brooke featuring newly commissioned essays on Borowczyk’s films and art, as well as an account of the meticulous restoration process involved.

To round off the release is, for the first time, an English translation of Borowczyk’s 1992 collection of short stories, Anatomy of the Devil, translated by the director’s assistant, Michael Levy.

Arrow Academy’s Walerian Borowczyk Collection is a vital addition to anyone interested in either world cinema, animation or experimental film.

THE SHORT FILMS & THEATRE OF MR AND MRS KABAL