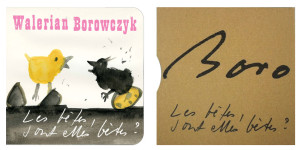 Unique children’s book by Borowczyk is published for the first time.

“When an owl closes an eye”, he thinks that “half the forest disappears”. Animals are dumb. But who says that? Humans, of course. Now, the animals get their chance to have their say. And what do they say? Some very dumb things indeed…

Dumb Animals (Les bêtes sont-elles bêtes ?) is the first and last book for children by the painter, sculptor and filmmaker Walerian Borowczyk (1923 – 2006). 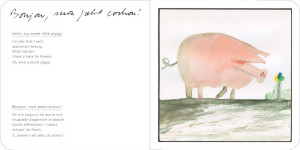 Discovered amongst Borowczyk’s papers after after his death, Dumb Animals reflects the author’s particular world view (not to mention his sense of humour…)

Published for the first time, this bilingual edition is strictly limited to 2000 copies.

Featuring ten of Borowczyk’s original water colours, accompanying stories by the author in both French and English, and his original handwritten calligraphy.

‘After Borowczyk retired from filmmaking during the early 1990s, he returned to his roots: painting. Borowczyk’s graphics dating from the 1990s have yet to be fully appreciated, and Dumb Animals is the perfect place to start’ (Daniel Bird)

Dumb Animals is of interest to aficionados of cinema, enthusiasts of illustration and design, and, above all else, discerning children.
Hardbound and complete with slipcase, ‘Dumb Animals’ is designed by Maciej Buszewicz, one of Poland’s leading graphic designers.